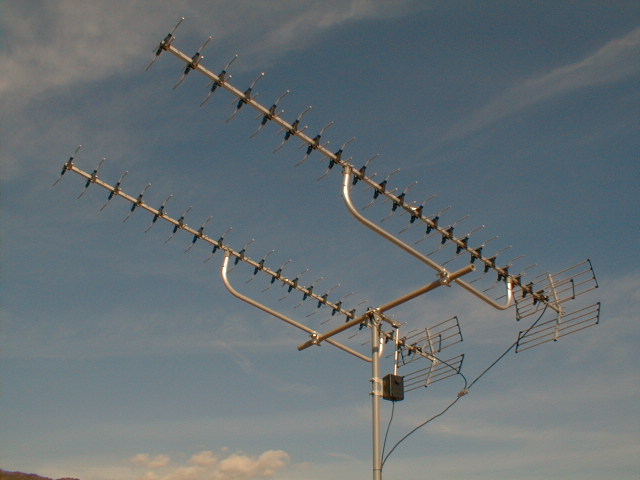 This is my first attempt at stacking UHF antennas. I used two Blake JBX21WB antennas. To confirm that the antennas were working properly and matched in performance I tested each antenna separately first. I used a Spectrum Analyzer to check the waveform for each station. The antennas were very closely matched. Horizontal stacking gives the best reduction in multipath since the vertical beamwidth is already very tight on a single antenna. I mounted the antennas to my ATF-V100 Vertical Tilter using a custom made boom assembly. This boom assembly uses a fiberglass tube to prevent the boom from becoming a active element in the antenna system. Each antenna mount clamps to the boom and allows for easy adjustments to the spacing between antennas. I started with a 28" spacing, then tried 20" and 36". See below for results and my comments following the tests.

Note: Signal level refers to the Dish 6000 indicator which measures the signal quality based on percentage of errors. As long as the indicator stays above 48-50%, the signal will lock. I assume that if you have over 50% errors, the Dish 6000 does not have enough good signal to decode properly. A reading of 100% would indicate no errors in signal. I have found that at 47% I will see pixelation in the picture and below 46% the picture will drop out completely.

**For easier printing, click on image to bring up a separate page containing just results.

This test was done in Pacific Palisades, Calif. using the same antenna setup shown above. In this location, line of sight is blocked by a large mountain ridge just a few miles away. The signal strength numbers can not be compared to the ones above because a RCA DTC100 receiver was used.

First test was using a single JBX21C/D, the remaining tests were done with a pair of horizontally stacked JBX21WB's.